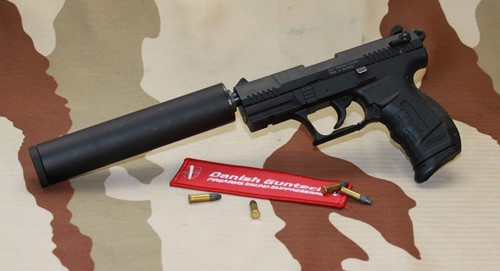 Pistol sound suppressors
Suppressor, silencer, a ‘can’ is expressions used when describing devices fitted to a gun aimed at lowering the noise.

Revolvers is (with one or two exemptions) unsuitable for sound suppression, because of gas leakages between the chambered round and the barrel. The usually quite short barrel of a pistol/handgun gives a very high and sharp sound signature, even with the fact in mind that the typically used calibre 9x19 parabellum is not at all as powerful as for example a .308 Nato round. Shots fired from a pistol compared to shots fired from a hunting rifle in these two different calibres, gives a signature where the dB measurements from the noise of the pistol is higher than from the rifle.

Pistols can also have a high sound level from the ejection port, this can also be the case with semi- or full automatic rifles. Bolt action is highly recommended for sound suppression.