The Danish Guntech suppressors for M16 / M4 / AR15 type riffles are all made for easy mounting on existing M16A2 muzzle compensators or flash hiders.... or can be delivered for use on the industry-standard ½"x28 UNEF thread.

Adding a sound suppressor to a M16 / M4 (or other AR15 type 5.56. rifles or carbines) will give the shooter a feeling of being able to control the rifle with much more ease, as the suppressor has very good muzzle brake and compensator effect.

A standard .223 Rem bullet is characterized with having a relative low flight noise level. This - and the fact that standard powder levels in the bullet are somewhat moderate – makes the .223 assault rifles relative easy to suppress to safe sound levels. When the M16 rifle is suppressed more dirt will however find its way back into the rifle. Thus, the receiver, magazines etc. will get more dirty compared to shooting un-suppressed. The slightly increased back gas pressure will also cause the sound levels from the ejection port to increase. The DGT suppressors for M16 5.56mm rifles are designed to minimize the negative effects of an increased back gas pressure.

A sound suppressor for M16 / M4 rifles is not able to eliminate the report from the shoot completely. Noise from the ejection port and from the bullet is normally the main source of noise on a suppressed M16. Optimizing for the lowest possible report thus includes not only a soft brass catcher but also special loaded 5.56 x 45 mm subsonic rounds with velocity around 300m/s (1000 fps)

A special characteristic of a suppressor from Daniah Guntech is its ability to decrease the natural bullet-spread of the 5.56 rifles. The Danish Guntech 5.56 sound suppressors are designed with symmetrical baffles and symmetrical mounting to ensure optimal precision of the M16 / M4 rifles. There is a slight compromise of sound attenuation effect by doing so (1-2 dB), but close co-operation with military end users and rigorous testing has proved that precision – and other characteristics – is preferred above sound levels. The increased precision is even more evident when using the very short DELTA-suppressor (special order) on short barrel carbine riffles - like the Colt Canada C8 or the Colt M4. 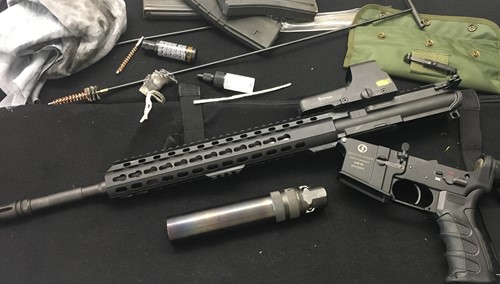 Quick mount
The new quick mounting unit locks directly on to a standard M16A2 birdcage. The build in gas seal unit hinders gasses from escaping through the mounting section in the direction of the shooter. A true one hand mount, which mounts and dismounts in just seconds – with no alterations to host weapon. It can be used on any weapon with standard M16A2 birdcage. Flash hiders can be delivered separately.