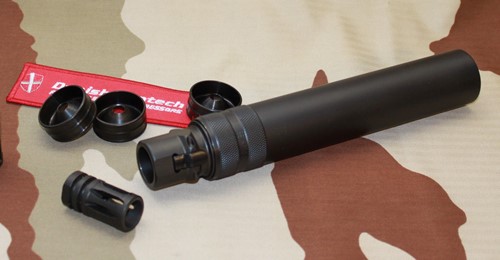 Why choose a Danish Guntech suppressor?

The people behind Danish Guntech have been dealing with military and law enforcement end users for several years. Several products developed in close cooperation with professional end users is in use with law-enforcement and military users around the world - and the development of new products newer stops.

In 2011 a new line of tough ''mil-standard" suppressors was released to the market. From a design point of view the 'only' focus has been to fulfill requirement seen by professional user both in versatility and in durability. In 2017 the basic design has undergone a few smaller modifications, resulting in a lighter product. Also, the product is available in a stainless-steel version with CeraCote surface treatment.

Danish Guntech has a continuous production of flash hiders for assault rifles. Standard M16A2 flash hiders - for use also with DGT quick mounting option - can be ordered with custom threading also. Please refer to our page on capabilities for information about custom work.